Public spaces in Ostrava will be enlivened by new art installations during the course of this year. Ten projects funded via the City’s public space subsidy programme (announced in May 2018) will be completed – including the “Hlubina Square” project, which centres around a fountain called “The Spirit of Hlubina”. A third sculpture was installed at the fountain on Tuesday 7 May. The City’s public space subsidy programme provides funding for citizens to get involved in creative improvements to streets, squares, parks, and other public areas. The programme is now in its third year; each year the City has released 5 million CZK from its budget to fund these improvements. 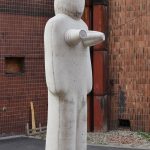 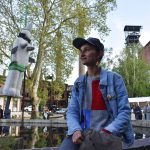 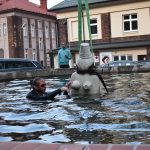 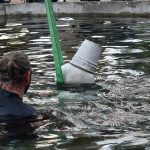 Deputy Mayor Kateřina Šebestová, who is responsible for the programme, gave more details: “Our subsidy programme supports activities which seek to enliven and revitalize public spaces throughout Ostrava. Some applications include works of art – I’m delighted that the outstanding local sculptor Šárka Mikesková has received support from the programme. Her sculpture is the third work to be installed at the Hlubina fountain, and the unveiling was a truly wonderful experience.”

The unveiling ceremony was rather unusual – actually the sculpture was not unveiled in the traditional sense, but it was submerged in the water at the fountain.

The Hlubina Square project in Lower Vítkovice Area received its first funding as part of the second call for projects within the subsidy scheme. The next step in the project will be to delineate a no-parking zone. This will create an area between the fountain and the beach at the Provoz Hlubina centre which will be set aside for leisure and relaxation. The entire surrounding area will be properly resurfaced with fine gravel, and the section between the fountain and the beach will be sprayed with green paint. Various items of street furniture will be installed – twenty benches, litter bins, and unusual seats up-cycled from used tyres.

The circle of grass around the fountain, the three plane trees and the plants on the terrace of the Maryčka café will become the site of a new “green island” – an eco-flowerbed for annual plants and perennials – and some new shrubs will planted on the northern edge of the Provoz Hlubina beach.

Once the bathroom block at the site has been reconstructed (known as the “new bathrooms”, following on from the “old bathroom” reconstruction), the entrance to the Hlubina site will undergo major alterations to create a gateway zone. The Hlubina Square area, funded via the City’s subsidy scheme, will then be completed for at least the next five years.

Ostrava’s City Assembly approved the third call for projects in the subsidy programme during April of this year. Applications for funding will be accepted from 13 May to 15 April. Projects that win funding will be implemented between February and November 2020. Since the scheme was launched three years ago, it has supported 23 public space projects worth a total 7 million CZK.