Ostrava has three main population centres, which are located at relatively large distances from each other. Between these densely populated residential areas and the areas offering employment, services and retail facilities are areas that are less attractive. Due to this physical configuration, it is difficult for Ostrava’s public transport system to compete with private (car) transport. This represents a challenge to public transport planning due to the daily movement of people between the residential areas and the city centre (or other locations where employment, services and retail facilities are located). Despite the high cost of running the public transport system and the very extensive network, two-thirds of Ostrava’s population have access to a public transport route within just five minutes’ walk from their place of residence. 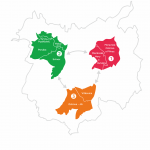