The LEXIS project at the National Supercomputing Centre will contribute to research of climate change, earthquakes and tsunamis 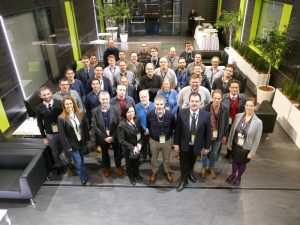 A research team lead by Jan Martinovič has launched work on a major new project called LEXIS. The project is divided into three separate pilot projects focusing on the aviation industry, meteorological and climatological models, and problems connected with earthquakes and tsunamis.

The LEXIS project (Large-scale Execution for Industry & Society) was formally launched in Ostrava during January 2019 at a meeting of project partners. The consortium has 16 members from 7 European countries, including representatives of major supercomputing centres, industry and technology providers. In today’s world, the growing volume of data generated by modern industrial and commercial processes presents a huge challenge for all kinds of organizations.

“We plan to create an advanced platform applying modern technologies and methods including high-performance computing, work with big data, and cloud services. The benefits of the LEXIS project will be demonstrated by verifying the use of the platform in three separate pilot projects, focusing on aviation, meteorological and climatological models, and problems connected with earthquakes and tsunamis.”

This is a highly prestigious venture for the VŠB-Technical University of Ostrava, where IT4Innovations is based. LEXIS is funded via the EU’s Horizon 2020 programme, and it is the first project of this type to be coordinated by the university.