Bikesharing in Ostrava to Continue with a New Operator

Bikesharing in Ostrava to Continue with a New Operator

The bicycle sharing system, a popular way of getting around the city, will continue this year in Ostrava with a new supplier Nextbike Czech Republic s.r.o.. Compared to last year’s pilot operation, this year will be more than three times larger. There should be up to 200 bike racks.

The service could start as early as April 1, with the season to end on November 30. But if the start is delayed, the end of the service will also be postponed. The new supplier will operate the service in Ostrava for eight months. 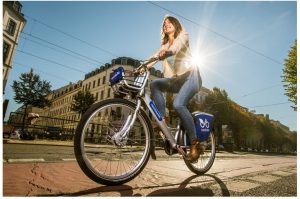 This year, the minimum number of bicycles is 400 for April and November, 500 for May October, and 600 for June, July, August and September. The company will provide urban-type bikes, all of which will now have 3 gears and a practical basket in the front. It will also regularly redistribute the bicycles around the city.

Users will leave the bicycles in bike racks, same as last year. The racks will now be placed in a number of other Ostrava districts. There will be 60 in Moravská Ostrava a Přívoz, 18 in Slezská Ostrava, 21 in Mariánské Hory a Hulváky, 20 in Vítkovice, 25 in Ostrava Jih, 45 in Poruba and 1 in Hošťálkovice.

The public contract was awarded to Nextbike Czech Republic s.r.o., which submitted the most economically advantageous bid.

Ostrava has long supported urban cycling. It currently has 253 kilometres of bicycle paths and others are being prepared and built. This year will see another 6 kilometers of new paths. Bikesharing is part of the city’s efforts to promote green transport.