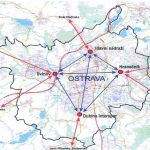 As part of the integrated system, four main transport terminals have recently been built:

The two public transport terminals (Svinov and Hranečník) also have Park + Ride sites, which could potentially help to reduce private car use within the city. P+R car parks in Ostrava are located not only at the main road access points to the city, but also at two major railway stations (the guarded car park at the Main Railway Station and the ‘KOMA’ parking garage at the railway station in Svinov). Currently, these two sites are used mainly by passengers travelling on rail routes from Ostrava to other destinations; the P+R car sites are not yet used to their full potential by motorists intending to continue their journey towards the city centre by public transport. In many cases, public transport journey times into the city centre are shorter than by car, because tram routes use their own strip in the middle of the roadway; this makes public transport a simple and comfortable option.

Four additional P+R sites are being built in Ostrava (the Globus shopping mall in Poruba, Přívoz, Lower Vítkovice, and a multi-storey parking garage near the City Hospital). A total of 500 spaces will be created at these sites by 2030 (at least 200 spaces by 2023).