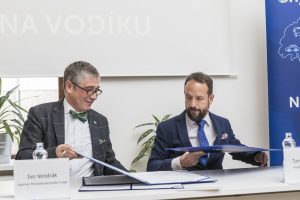 In addition to the Memorandum between the City and the Region, another memorandum, concerning the introduction of hydrogen mobility in the region, was signed between Vítkovice Cylinders and the Region. The purpose of the cooperation of the city, region and Vítkovice on promoting the use of hydrogen propulsion in transport is to minimise environmental impact of transport emissions. Also important is the possibility to create a new industrial sector, which will create a number of jobs.

“Hydrogen technologies are generally considered highly promising for the development of Europe’s energy self-sufficiency and efficiency. For a historically industrialized region such as Ostrava, they can become a good tool for further development in all areas. In transport, for example, Ostrava set out its commitment to completely eliminate diesel transport from urban mass transport by 2020 and to replace it entirely with green vehicles, mostly electric, partly CNG-powered. However, progress cannot be stopped, and therefore we would like to start testing hydrogen-powered vehicles in the Ostrava’s public transport. We are convinced that the public administration should be in the vanguard of such projects”, said Mayor of Ostrava Tomáš Macura.

Governor Ivo Vondrák pointed out that the actual production of hydrogen fuel can be absolutely clean, emission-free. The new technology would, in his opinion, create in the future a new industry, which would replace coal as the source powering our region.